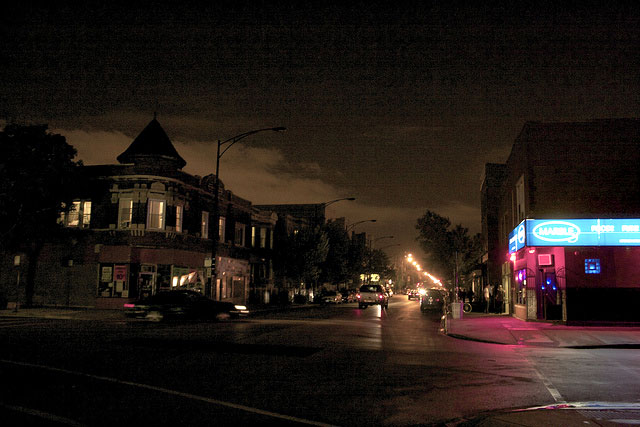 This one goes out to my Twitter friend @TeresaFederici, who also likes Frost.

As regular readers of this site are aware, one thing I do here is to search out big, easy-to-get-with examples of emotional insight in art – examples you can look at briefly and immediately say, “Wow, I get that. It has a huge meaning to me that I grasp with my own emotional ability.”

Intellectually this is all very easy to follow up until the last two lines:

Acquainted with the Night

I have been one acquainted with the night.
I have walked out in rain — and back in rain.
I have outwalked the furthest city light.

I have looked down the saddest city lane.
I have passed by the watchman on his beat
And dropped my eyes, unwilling to explain.

I have stood still and stopped the sound of feet
When far away an interrupted cry
Came over houses from another street,

But not to call me back or say good-bye;
And further still at an unearthly height,
A luminary clock against the sky

Proclaimed the time was neither wrong nor right.
I have been one acquainted with the night.

As is often the case with Frost’s poems, the last two lines pack a wallop.

A luminary clock against the sky

Proclaimed the time was neither wrong nor right.
I have been one acquainted with the night.

Intellectually I can’t say how a time can be “neither wrong nor right,” but emotionally, I feel those last lines in a big way:  “Yes – I’ve felt that. I’ve felt exactly what Frost is describing.”