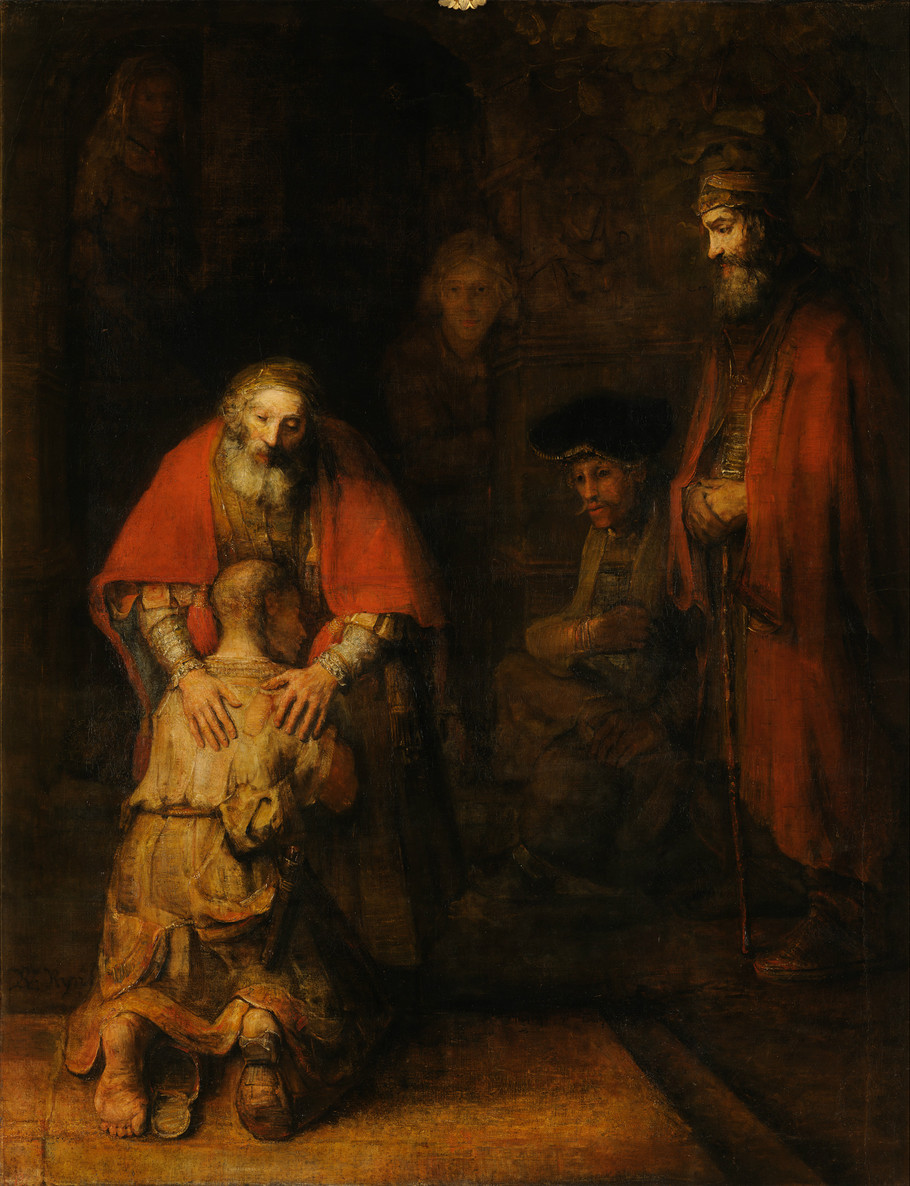 The Return of the Prodigal Son, by Rembrandt

Here’s the story of the prodigal son from the Bible. It’s quite moving.

11 And he said, A certain man had two sons:
12 And the younger of them said to his father, Father, give me the portion of goods that falleth to me. And he divided unto them his living.
13 And not many days after the younger son gathered all together, and took his journey into a far country, and there wasted his substance with riotous living.
14 And when he had spent all, there arose a mighty famine in that land; and he began to be in want.
15 And he went and joined himself to a citizen of that country; and he sent him into his fields to feed swine.
16 And he would fain have filled his belly with the husks that the swine did eat: and no man gave unto him.
17 And when he came to himself, he said, How many hired servants of my father’s have bread enough and to spare, and I perish with hunger!
18 I will arise and go to my father, and will say unto him, Father, I have sinned against heaven, and before thee,
19 And am no more worthy to be called thy son: make me as one of thy hired servants.
20 And he arose, and came to his father. But when he was yet a great way off, his father saw him, and had compassion, and ran, and fell on his neck, and kissed him.
21 And the son said unto him, Father, I have sinned against heaven, and in thy sight, and am no more worthy to be called thy son.
22 But the father said to his servants, Bring forth the best robe, and put it on him; and put a ring on his hand, and shoes on his feet:
23 And bring hither the fatted calf, and kill it; and let us eat, and be merry:
24 For this my son was dead, and is alive again; he was lost, and is found. And they began to be merry.

The Bible is jammed with emotional insight. So this post is a twofer. We’re going to talk about the biblical story of the prodigal son, and then about the Rembrandt painting.

O, my offence is rank it smells to heaven;
It hath the primal eldest curse upon’t,
A brother’s murder. Pray can I not,
Though inclination be as sharp as will:
My stronger guilt defeats my strong intent;
And, like a man to double business bound,
I stand in pause where I shall first begin,
And both neglect. What if this cursed hand
Were thicker than itself with brother’s blood,
Is there not rain enough in the sweet heavens
To wash it white as snow? Whereto serves mercy
But to confront the visage of offence?
And what’s in prayer but this two-fold force,
To be forestalled ere we come to fall,
Or pardon’d being down? Then I’ll look up;
My fault is past. But, O, what form of prayer
Can serve my turn? ‘Forgive me my foul murder’?
That cannot be; since I am still possess’d
Of those effects for which I did the murder,
My crown, mine own ambition and my queen.
May one be pardon’d and retain the offence?

Hey, now we’re into Shakespeare. So it’s a three-fer. I think something’s telling me I’m in the mood to write more posts guiding people to see the emotional insights in works of art.

So now this is like the movie Inception. I have to come out of Hamlet, then out of the Bible, and then look at Rembrandt.

Let’s do it. I still remember reading those lines from Hamlet for the first time, in my apartment when I was in college. It blew me away. You must give up whatever you got from your misbehavior if you want to repent it and forgive yourself for it. That’s just a small part of what it meant to me.

Now look at the story in the Bible.  In order to repent, to forgive himself, to be worthy of forgiveness, the son gives up the one thing he has left – the right to call himself his father’s son. He goes to his father to beg to be a laborer in his father’s fields, to be no more than a servant to his own father.  This enormous sacrifice shows us that he is worthy of our compassion. It’s moving, isn’t it? Do you feel it?

Now look at the young man’s bare left foot in the painting.  Look at the way his head is turned as he hugs his father. Do you feel his humility? His supplication, his grief, his gratitude?

You feel it or you don’t. But I’m pointing you right at it.

One Comment on “The Return of the Prodigal Son, by Rembrandt”